The via Francigena is a path travelled in the past by thousands of pilgrims travelling to Rome. The story tells that was Sigeric, Archbishop of Canterbury, visiting Rome to meet Pope John XV, to mark the start of the journey, known as the Via Francigena, resulting was the birth of one of the most important routes of pilgrimage from Canterbury to Rome and constituted one of the most important European traffic routes in medieval times.
It is known as three were the poles of attraction for this humanity journey: Rome, place of martyrdom of Saints Peter and Paul, founders of the Christian Church community; the Holy Land, seat of Golgotha, where they researched the places of the passion of Christ; Santiago de Compostela, extreme tip of Western Europe, where the Apostle St. James had chosen to rest in peace.
And so Europe became a great collector of roads, paths and routes, all converging towards the places of pilgrimage.
The via Francigena is spread over a path of 1600 km from Canterbury. The way crosses the Alps in Valle d’Aosta and descended from Piedmont and Lombardy from the Po Valley, crossing the Apennines towards Berceto, ran through the Tuscan and Lazio to reach Rome.
Still today are traceable on our territories fragments and memories of those routes that founded the history of Europe.

CARTOGRAPHY
Cartography Notes on the trail: Getting to the point of departure: railway lines and Empoli-Siena-Grosseto Siena-Chiusi, Siena train station. Cycling: 100% If you traveled on a beautiful sunny day, this stage can become memorable thanks to the boundless landscapes that can be enjoyed from the ridges of the Val d’Arbia, which are paths along endless dirt roads. Behind us we can see the profile of Siena, nestled in the hills on the horizon. The Grange of Cuna, an ancient fortified granary, is the main attraction of this historic tract. To find a point of rest must deviate from the Isle d’Arbia, while the water (very little) can also be found at the Grange of Cuna. 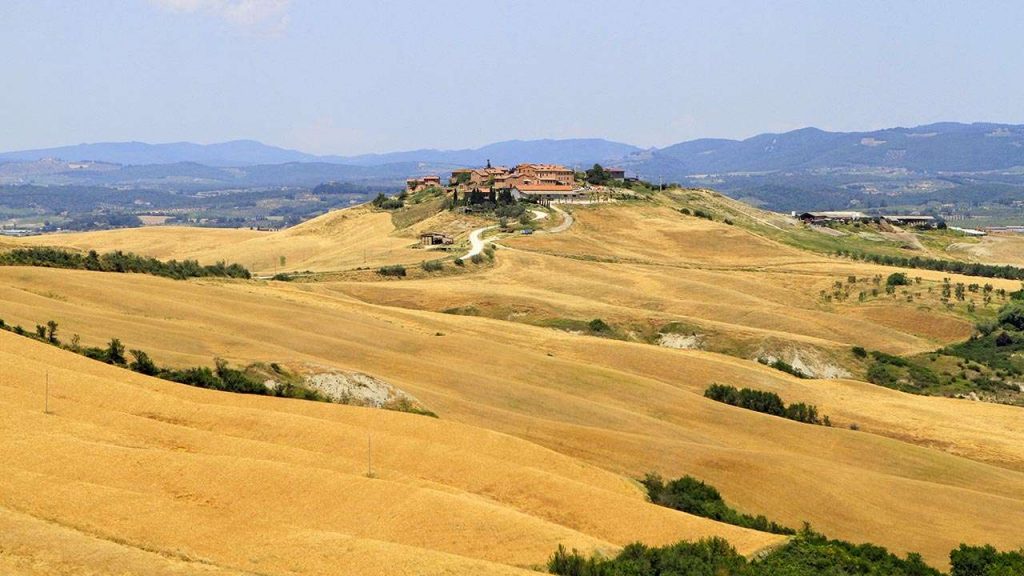